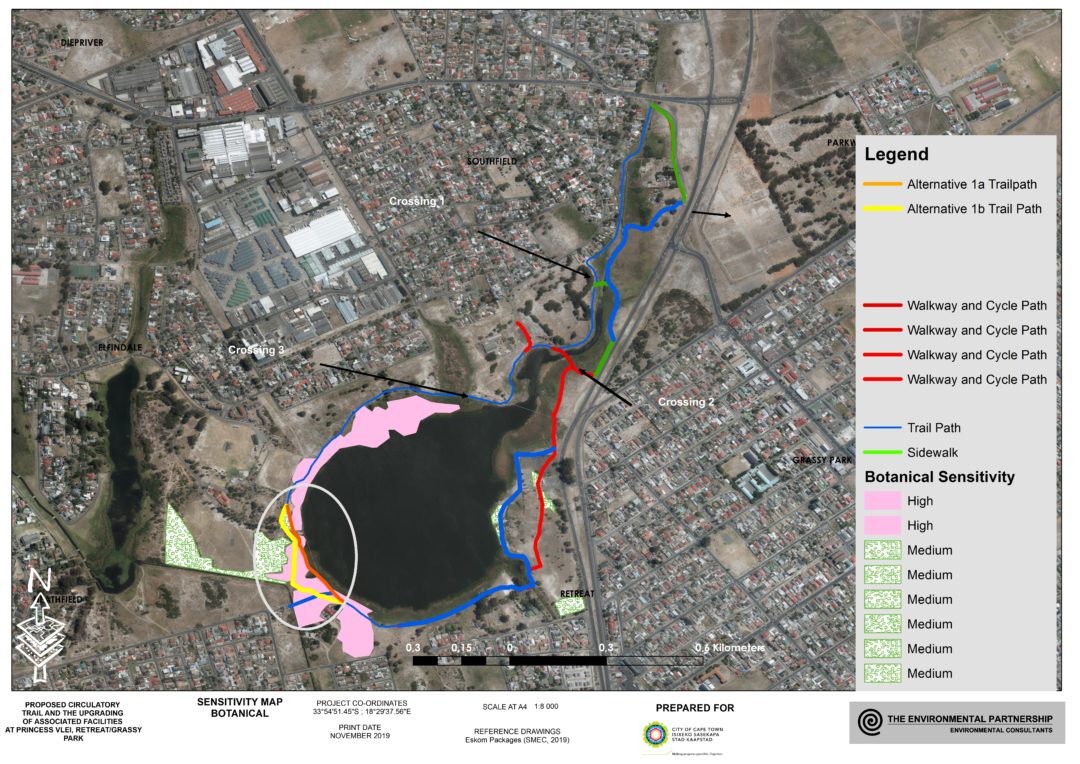 INTRODUCTION AND BACKGROUND
This Basic Assessment Report (BAR) forms part of an Environmental Impact Assessment process being undertaken for the proposed construction of a circulatory trail at Princess Vlei in Grassy Park, and the upgrading of the Eco-Centre adjacent to Princess Vlei. The City of Cape Town (CoCT), the proponent, wishes to develop a circulatory trail abutting Princess Vlei which includes walkways, cycle paths, sidewalks, and trail paths. Three boardwalk bridges to access different parts of the site will also be constructed in the northern section of the Princess Vlei. An upgrade to the Princess Vlei Eco Centre, located west of the vlei, is also proposed as part of the development. . Please see Appendix B: Locality Map and Appendix C: Princess Vlei Conceptual Development Framework.
The site on which development is proposed is bound by Retreat and Southfield to the west and north, respectively. Prince George Drive, stretching east and south of the study area separates the site from the Grassy Park residential area in the east. Please see Appendix B: Locality Map.

PROJECT PROPOSAL
The vision for Princess Vlei and its environs, as per the Conceptual Development Framework (See Appendix C), is to establish an “inclusive, people-orientated, multi-use” area that considers and incorporates the natural environment, heritage value, diverse opportunities, public activity and enjoyment. The proposed development responds to this vision as features that are people-oriented, inclusive, and are of multi-use form part of the development. The following is proposed in this application.
Circulatory trail:

A circulatory trail was identified as a need within the community that would provide safe and accessible access to the Princess Vlei. Part of the proposal is to formalise an existing access point to the trail on the north west portion of the Vlei, giving residents from Retreat access to the western edge. This access point will be linking Sunnybrook Way to the northwestern portion of the circulatory trail. Three access points (in the south, north, and east sections of the site) will be formalised for machinery access into the vlei for the removal of hyacinth. The circulatory trail includes a combination of formal pathways and three boardwalk bridges. The length of the circulatory trail is approximately 4 835 metres along the entire section of the vlei and varies in width. The trail will be constructed using a combination of materials including laterite, gravel, sand, interlocking pavers, and a timber boardwalk. At three locations along the circulatory trail a boardwalk bridge will be constructed from Eucalyptus cladocalyx. A customised jetty is proposed to be constructed to make it safer for use for religious activities such as baptism. The jetty will be located at the existing lookout point in the southeast section of the site. Please see Appendix D(i).
Princess Vlei Eco-Centre:

Listing Notice 3 (GN985 of 2014, as amended)
Activity 12
The clearance of an area of 300 square metres or more of indigenous vegetation except where such clearance of indigenous vegetation is required for maintenance purposes undertaken in accordance with a maintenance management plan.
In Western Cape:
(ii) Within critical biodiversity areas identified in bioregional plans

PUBLIC PARTICIPATION
Public participation is a key component of the environmental assessment process as it introduces the proposed activity to the public and provides an opportunity for comments and concerns to be raised. Public participation was undertaken in terms of Section 41 of the 2014, NEMA: EIA Regulations, as amended. Below is an outline of what was undertaken:

The draft Basic Assessment Report was made available to the broader public, identified interested and affected parties and Organs of State for their perusal and comment from 13 November to 13 December 2019 by the following means:

•Distribution of an Information Sheet (summary of the BAR) to all directly adjacent landowners and occupiers, Interested and Affected Parties (I&APs), and the Ward Councillor. Where applicable, information sheets were distributed by email, fax, post or hand-delivered.
• Distribution of copies of the draft BAR to relevant Orangs of State for comment
• Placement of copies at the Grassy Park Library for public viewing between 13 November 2019 and 13 December 2019.
• An Open House public forum (poster display of information) was held on 26 November 2019 at the Grassy Park Civic Centre from 4pm to 8pm.
• Placement of a media notice in two newspapers namely; the Southern Mail and Cape Argus on 13 November 2019. The following was included in the media notice:
– A brief description of the project.
– An outline of the applicable legislation.
– Notification that an electronic copy of the draft BAR was placed on The Environmental Partnership’s website, www.enviropart.co.za, and that a   hardcopy of the report is available at the Grassy Park Public Library from 13 November 2019 to 13 December 2019.
– An invitation to a public forum to be held on 26 November 2019 at Grassy Park Civic Centre from 4pm to 8pm. Members of the public can pop in at any time that suits them in the four hour period.
– The commenting period within which to submit comments.
– Information on how to register as an I&AP.
• Placement of site notices on the boundary of the site where the listed activity is to be undertaken on 13 November 2019.
• Placement of the BAR on The Environmental Partnership website.
• The 30-day commenting period commenced on 13 November 2019 and ended on 13 December 2019.

WAY FORWARD
This revised Basic Assessment Report is being made available for a 30-day commenting period to registered I&APs and relevant Organs of State for their perusal and comment from 30 June to 30 July 2020. At the end of the commenting period, all comments will be captured and addressed in a Comments Table which will be included in a finalised Basic Assessment Report and submitted to the regulatory authority, the Department of Environmental Affairs and Development Planning (DEA&DP), for decision.
Comments on this report may be submitted on or before 30 July 2020 to:

Appendix A – Curriculum Vitae of EAP

Appendix O – Confirmation that 2017 template can be utilised

Appendix O – Confirmation that 2017 template can be utilised