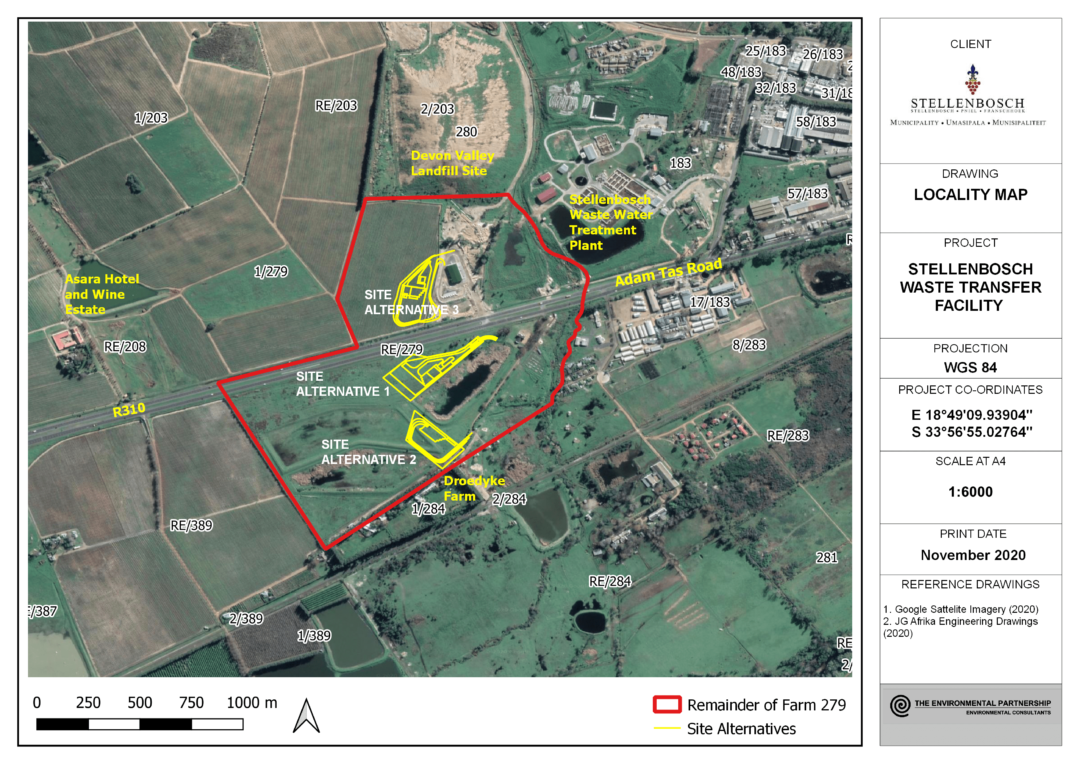 The Basic Assessment Report has been revised and is being made available for a second 30-day commenting period to the broader public, identified I&APs and relevant Organs of State for their perusal and comment. The commenting period commences on 11 November 2020 and closes on 11 December 2020.

Farm 279/RE is located south of the Stellenbosch Landfill Site, east of the Stellenbosch Waste Water Treatment Works and Wynland Water Vereeniging, and north of Droë Dyke Farm. Please see the Locality Map attached at the end of this information sheet.

The primary waste stream to be handled at the proposed facility is residual waste collected from domestic households within Stellenbosch. Provision has been made to include waste collected from the trial organics separation at source programme. The proposed facility will not operate as a public drop-off facility. Waste entering and leaving the proposed transfer facility will be handled by the Stellenbosch Municipality and approved contractors and off-takers.

The proposed facility is designed to accommodate delivery of waste by 10 trucks undertaking two to three trips per day. General waste will only be accepted at the facility if there is a contractor to collect the waste (also referred to as an “off-taker”). If there is no off-taker, the general waste will be taken to the current landfill site in Devon Valley. The collection of the waste for beneficiation would be by the off-taker, using their own fleet and resources.

The three alternatives are described below.

The development footprint of Site Alternative 1 is 12 200m2 in extent and is located south of the R310, and the Asara Wine Estate and Hotel. Settlement Pond 1, a remnant Settlement Pond, is located south / south-east of Site Alternative 1. East of the site is the Wynland Water Vereeniging. West of the site is the remaining vacant land of Farm 279/RE.

The development footprint of Site Alternative 2 is 9 140m2 in extent and is located just north of the southern boundary of Farm 279/RE. East of this site alternative is Settlement Pond 1. To the north is the remainder of the vacant land of Farm 279/RE. This site alternative is positioned further from the R310 road as opposed to Site Alternative 1. The access road and ramp to the facility will be constructed over a portion of Settlement Ponds 2 and 3.

The building layout is very similar for all site alternatives, which will include:

The development of infrastructure or structures with a physical footprint of 100 square metres or more within 32 metres of a watercourse, measured from the edge of a watercourse.

Residential, mixed, retail, commercial, industrial or institutional developments where such land was used for agriculture, game farming, equestrian purposes or afforestation on or after 01 April 1998 and where such development will occur outside an urban area, where the total land to be developed is bigger than 1 hectare.

The following impacts have been identified and assessed for Site Alternatives 1, 2 and 3, as well as Alternative 4, the no-go alternative (do nothing).

The Basic Assessment Report has been revised and is being made available for a second 30-day commenting period to the broader public, identified I&APs and relevant Organs of State for their perusal and comment. The commenting period commences on 11 November 2020 and closes on 11 December 2020.

At the end of the commenting period, all comments will be captured and addressed and included in a Final Basic Assessment Report which will be submitted to the competent authority, the Department of Environmental Affairs and Development Planning for the environmental decision.

Comments on this report may be submitted on or before 11 December 2020 to:

For a concise yet comprehensive summary of the Basic Assessment Report, please see this Information Sheet.

Appendix A: Details and Expertise of EAP

Appendix I(ii): Proof of Submission of HIA to HWC

Appendix S: DEA&DP Letter to Municipalities to Reduce Organic Waste to Landfills by 2022

Appendix U: Correspondence with DEA&DP